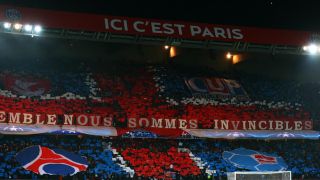 Paris Saint-Germain have been fined and threatened with a potential supporters' ban by the Ligue de Football Professional (LFP) due to damage caused during their Coupe de la Ligue final victory over Monaco at Parc OL earlier this month.

PSG defeated Monaco 4-1 at the home of Lyon on April 1 but seats at the stadium were ripped up, toilets were damaged and graffiti was found on walls.

The LFP's disciplinary committee hit PSG with a €100,000 fine and threatened the partial closure of Parc des Princes for two matches – the suspended sentence would affect the vocal Auteil end of the stadium, where the team's Ultras are based.

PSG's punishment also included the absence of travelling fans for two games, which was served in wins against Angers and Metz.

In a statement released by PSG, it read: "The club noted with interest the statements of the president of the commission, noting that Paris Saint-Germain had an exemplary disciplinary record and that PSG was not fully in control of the organisation, since the LFP was the organiser of the final of the Coupe de la Ligue held on April 1 in Lyon.

"Nevertheless, the club regrets that the liability of the LFP was not taken into account in the sanctions imposed, in particular the unusually high amount of the fine imposed, in light of the decisions usually taken in those circumstances.

"The club will pay close attention to the reasons for the decision as soon as they are transmitted.

"Lastly, Paris Saint-Germain will be extremely attentive to the follow-up to be given by the commission, both in regards to the role of organiser of the LFP and the communication of the elements which it has requested in the context of the investigation carried out.

"The club reaffirms its strong condemnation of the unacceptable voluntary degradations that were committed during the final in Parc OL, as well as its will to sanction the perpetrators of these events without any amalgamation or complacency.

"Paris Saint-Germain also intends to reaffirm, in application of the law of 10 May 2016 known as Loi Braillard, its desire to continue and strengthen the dialogue with its supporters in an intangible and non-negotiable security framework."