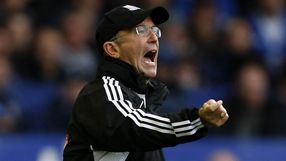 With a number of key decisions going against Pulis's side in recent weeks, the 52-year-old believes Premier League managers should be able to vote on the performance of the officials.

The Potters were denied a penalty against Sunderland at the weekend after Lee Cattermole was seen handling the ball on the goal-line following a header from striker Kenwyne Jones.

Defender Ryan Shawcross was then sent off for two borderline bookable offences as Stoke went on to lose 2-0.

A couple of weeks ago, Manchester United's Gary Neville was lucky to escape a red card at the Britannia Stadium after two first-half fouls on Potters winger Matthew Etherington.

Pulis has become angered by the decisions and insists it is time to make changes to the refereeing system.

The former Gillingham and Portsmouth manager explained: "Over the weekend I have thought about it and I want to be constructive, so I think we should put in place a system where every Premier League club has a vote at the end of the season on referees, and the bottom three referees should be relegated to the Championship and the top three referees from the Championship should be promoted.

"The treatment this football club has had with respect to the decisions has been appalling. It cannot be right that these decisions consistently go on without being addressed.

"Don't kid yourself that this hasn't happened in the first two years that we were in the Premier League. We've had decisions that have been absolutely abysmal but we have kept our grace and just got on with things."

"I suppose that there's one or two that you'd relegate," White Hart Lane supremo Redknapp said. "Tony's a bright lad and if he thinks it's a good idea then it's probably worth an idea.

"We have to listen to plenty of idiots that come up with ideas and we have to think about them, so this one is worth listening to."