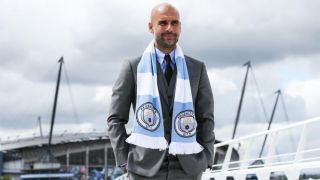 "It begins" is the slogan Manchester City have used to herald Pep Guardiola's first week in charge. Whatever "it" is, he's ready for it.

The new manager's first media conference in England may have lacked the punch of Jose Mourinho's pre-season mind games on the other side of Manchester this week, but it gave poignant insight into why City have worked so long to put this man in charge.

On Monday, the new Manchester United boss took aim at predecessor Louis van Gaal, critics of his record with youth players and - of course - Arsene Wenger. Guardiola trod a more diplomatic path, but the steely edge shone through just the same.

The Catalan told fans to "fasten their seat belts" when he took over at Barcelona in 2008; he vowed to offer relentless, attacking football when he took the helm of the Bayern Munich juggernaut four years later.

On Friday, there was no bravado, no assurances of a repeat of his unflinching dominance in Spain and Germany. If City's pursuit of the Barca blueprint had been building to this moment, it threatened to be something of a damp squib at first.

"I congratulate Manchester City, it's really amazing," he said of his new surroundings, stealing a glance through the windows at the pristine venue of City's Football Academy.

He thanked the club for 'giving him the chance' of coming to England; he praised owner Sheikh Mansour for his support; he hailed the quality of the youth players he is determined to call upon.

In short, he made all the noises City fans wanted to hear with an almost endearing timidity, turning for help with translation, smiling at the questions, even professing "I'm afraid of you all!" as the cameras continued to click.

That was until the style question was raised. Guardiola's gaze did not flinch as he was asked if his lauded possession method would be untenable in the physical Premier League.

"That's why I'm here," came the immediate retort. "To prove myself. It would have been comfortable to stay where I was."

It was the clinical response of a coach who has won 21 trophies in eight years, and testament to just why City have courted him for so long.

If demure dignity and a smattering of silverware were enough, Manuel Pellegrini would still be in the job. This is a man who has come to dominate - not only at the behest of the owners, but to satisfy his own insatiable drive.

He continues to play his cards close to his chest when it comes to his plans for his City adventure. He dismissed questions on transfer targets as being unfair on players at other clubs; he gave old rivals Mourinho and Jurgen Klopp nothing more than quiet thanks for making him a better coach.

But the smiles and the pleasantries could not hide the hunger. That should give fans of the 'noisy neighbours' plenty to shout about.