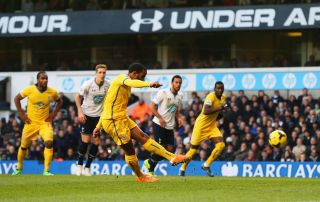 Puncheon hit the headlines this weekend after blazing a woeful penalty against Tottenham high and wide in the Premier League defeat at White Hart Lane - a miss that has been described as one of the worst in recent memory.

That led to criticism from Warnock, who managed the 27-year-old during a loan spell at QPR in 2011, while he was speaking as a radio pundit on talkSPORT.

And on Monday, Puncheon hit back via Twitter, posting a series of tweets - some of which were later deleted - that included allegations over the way Warnock selected his teams, as well an attack on his training regime.

Puncheon is currently on loan at Crystal Palace from Southampton, and has scored just once this season - from the penalty spot - during the 1-1 draw with Norwich City on New Year's Day.

Warnock responded to allegations made by Puncheon in his tweets, telling the Telegraph: "He’s made comments that I know nothing about and if it’s been suggested that I’ve done anything untoward then I can confirm that I most certainly have not.

"The matter is being addressed with him directly now on my behalf."