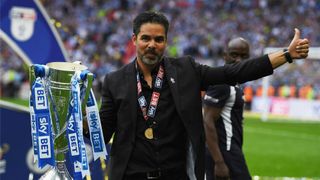 David Wagner said it was an "unbelievable story" and a "fairytale" after Huddersfield Town won promotion to the Premier League for the first time in the club's history.

Town drew all three of their Championship play-off matches but triumphed 4-3 on penalties against Reading at Wembley on Monday, having also needed spot-kicks to get through a tight semi-final against Sheffield Wednesday.

Wagner - appointed Huddersfield manager in November 2015 - led his side to promotion despite working on a small budget compared to the biggest clubs in the Championship.

And the German hailed the club's achievement having prevailed against the odds to reach the top division for the first time since 1972.

"A lot of the pundits wrote us off before the season," Wagner told Sky Sports. "Over the season I thought we could do a little bit more, I thought around Christmas when we'd played everyone we had a chance.

"What happened is an unbelievable story - a fairytale."

Former Borussia Dortmund II coach Wagner insisted he had been written off because of his lack of knowledge of English football after taking his first senior job in management.

"We tried a lot of small details to bring this club forward - usually you need three or four years to do what we've done," Wagner continued.

"It's proved experience is important but not everything. It's heart and desire. We only wanted to play this season to our limits, and now we know where our limit is."

Huddersfield chairman Dean Hoyle insisted his club had earned promotion "the right way" after overcoming Reading in a game reported to be worth as much as £290million if Town survive in the Premier League next season.

"I'm so emotional. To say I've been supporting this club since 1969, to be a Premier League team now - dreams come true," Hoyle told Sky Sports.

"It's huge what it means for Huddersfield, we're on the big stage. It proves you don't have to blow your brains to get promoted. We've done it the right way.

"It's a crazy world. Reading have lost on penalties and that's really cruel. The prize is so big and I feel for them. It's our turn. We deserve it because of the way we've done it.

"We can give lots of people hope, smaller clubs that keep believing - you can achieve the impossible."