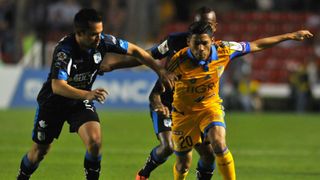 There is everything to play for in the second leg of the CONCACAF Champions League semi-final between Mexican rivals Queretaro and Tigres UANL.

The two sides could not be separated in the first leg as hosts Queretaro held Tigres to a 0-0 draw.

The home side will be disappointed not to be taking an advantage to the Estadio Universitario de Nuevo Leon in three weeks but will be pleased to have not conceded an away goal.

Tigres boasted the majority of possession but it was the home side that had the better chances, forcing six shots on target.

Both sides have never played in the final of the tournament and will be hungry to change that in the second leg.