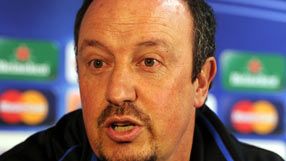 Speaking ahead of his Inter Milan side's Champions League game against Tottenham Hotspur, Benitez was asked for his view on new Liverpool boss Roy Hodgson's comments about Kenny Dalglish's role at Anfield.

Hodgson said on Sunday that he wanted to involve the former striker much more unlike under Benitez when he (Dalglish) was there in name but not allowed to step foot in the club's Melwood training ground.

Having delivered 15 minutes of his usual straight-batted answers about Inter's prospects Benitez burst into life when Hodgson's name was mentioned.

"Every single press conference is even worse than the last one. He is talking about things he doesn't know... some people cannot see a priest in a mountain of sugar," the Spaniard said in English, adding the unusual phrase to his growing collection.

"And some people cannot see a priest on a mountain of sugar. Maybe he hasn't been in Liverpool too long. We gave the fans their pride - again. We fought for the fans, we fought for the club and we fought for our players, maybe he cannot understand this."

"I brought back Kenny Dalglish to do a role in the club and (director) Christian Purslow gave him another role," he said.

"So, instead of talking about the flips or the flops, he has to concentrate on his players, try to do his best."

"So, instead of talking about flips and flops, he has to concentrate on his job and not talk about the level of his players or the new players."