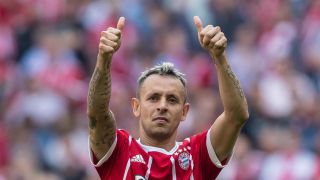 Bayern sporting director Hasan Salihamidzic announced on Friday that Rafinha and winger Arjen Robben had agreed to commit their futures to the club for another season.

And Rafinha, who made 27 Bundesliga appearances as Bayern won the title for the sixth year in a row this term, put pen to paper on his deal on Tuesday.

It has been a good week for the 32-year-old defender, who was named in Brazil's final 23-man squad for the World Cup on Monday by coach Tite.

Robben's fellow attacker Franck Ribery has also agreed a one-year contract extension that will keep him at the Allianz Arena until June 2019.