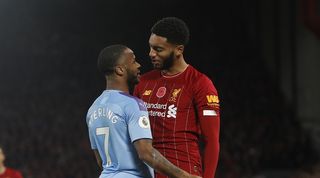 Gareth Southgate reportedly axed Raheem Sterling from the England squad after his bust-up with Joe Gomez, only to change his mind when the Manchester City winger was returning home.

Sterling and Liverpool defender Gomez clashed in the second half of City's 3-1 defeat at Anfield on Sunday.

The pair then renewed hostilities at St George's Park the following day, with Sterling allegedly confronting Gomez in the canteen.

It is claimed that the forward shouted at his international team-mate and even tried to grab him by the throat, before the two men were pulled apart.

According to The Times, Southgate initially decided to drop Sterling from the England squad to face Montenegro and Kosovo in their final two Euro 2020 qualifiers in the coming days.

However, the Three Lions boss had a change of heart and informed Sterling that he could rejoin the group while the City star was driving back to Manchester.

The 24-year-old will not be considered for selection for England's 1000th match against Montenegro on Thursday.

But Sterling is expected to return to the fold when Southgate's side take on Kosovo on Sunday.

“The FA can confirm Raheem Sterling will not be considered for Thursday’s EURO 2020 qualifier against Montenegro as a result of a disturbance in a private team area at St. George’s Park today," read a statement released by the FA. "He will remain with the squad.”

City fell nine points adrift of top spot after Sunday's loss on Merseyside, but Sterling has enjoyed an excellent start to the season for club and country.

The former Liverpool winger has scored seven goals in 11 Premier League outings, and four in four games for England since the start of 2019/20.

The Three Lions will qualify for next summer's European Championship if they avoid defeat against Montenegro on Thursday.