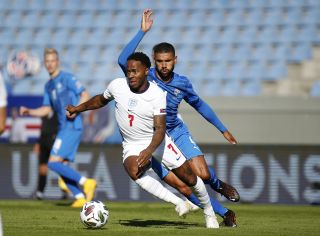 Raheem Sterling praised 10-man England for picking up a win in “strange” circumstances as his last-gasp penalty earned a 1-0 Nations League victory over Iceland.

Playing their first match in 10 months due to the coronavirus pandemic, the Three Lions were far from their best and could be considered somewhat fortunate to emerge victorious in Reykjavik.

They lost Kyle Walker to a red card midway through the second half and, after Sterling had put them ahead with a 90th-minute penalty, saw Iceland miss a spot-kick of their own when Birkir Bjarnason blazed over.

“It was definitely strange, the first game back,” said match-winner Sterling, who insisted he was always confident he would tuck away his penalty.

“It (the game) was my third training session this week so we always knew it would be difficult but there is no better way to get your fitness than in matches.

“It was tough but we got through it, we knew we had to challenge ourselves and find something deep within.”

A good win to start our season! Tough game and lots to improve on! 💪🏴󠁧󠁢󠁥󠁮󠁧󠁿 pic.twitter.com/BBuD4rL78q— Harry Kane (@HKane) September 5, 2020

He added on Sky Sports: “We didn’t expect the red card but it happened and we kept trying to play our football… we got the penalty in the end.

It may not have been the most memorable of matches for most, but it was an unforgettable one for Sterling’s Manchester City team-mate Phil Foden, who was handed his England debut.

“It feels amazing, it is a dream come true,” the 20-year-old midfielder said.

“It was a very difficult game, they defended well and we showed great character to stick in the game and luckily got the penalty at the end and scored.

“We all just tried to play our football and do what we do at our clubs, it was frustrating at times and we couldn’t break them down.

“I play at Man City and now play for England, it is very similar, a very high standard.”

England boss Gareth Southgate was pleased with his side’s reaction to Walker’s “unnecessary” red card with 20 minutes to go.

He also felt Harry Kane’s disallowed opener should not have been chalked off in a performance he described as a “real mixed bag.”

Southgate said: “I think we started well, were sharp for 15, 20. I think the goal should stand and have a good bearing on the flow of the game.

“Then I thought we were good until the final third but a lack of match sharpness showed in our creative play. Defensively reasonably solid, caught on a few counter-attacks, but defended set plays well. The sending off is a key moment, very difficult to win games at any level with 10 men.“It was an unnecessary red card but the response was great, we managed to stay in possession of the ball, still looked a threat.”

He added: “It kind of summed the week up, it’s been so difficult to piece everything together with so many challenges and we leave here with a win, some experience for young players but a bit flat because in the end it feels like we got away with it.”

On Walker’s red card affecting selection chances, he said: “He realises those sorts of challenges invite the opportunity for the ref to make the decision, which was the right decision. I have no complaints with the officials on the penalties or red card.

“We’ve talked a lot over the years about discipline – the number of times we’ve gone out of tournaments with 10 men. It’s not something we want to see again.”

He said: “Obviously to get sent off for your country is never a nice moment, especially on the caps I’m at with 49 and being out of the team for so long.

“I have to take full blame, I’m an experienced player and I should know I’m on a yellow card and to make a rash challenge like that is not acceptable from me.”

Asked if he was trying too hard to impress, the Manchester City full-back added: “Possibly. That probably plays a big part in it but I don’t blame that, I’m a seasoned professional and I have played a lot of games.

“I should know how to manage a game if I’m on a yellow card – you have to say fair play to the lads for digging in and fighting and getting the win we needed.”