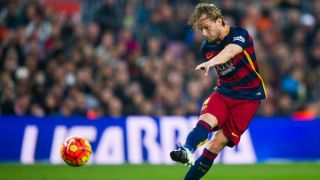 Barcelona were held to a 0-0 draw by Espanyol in the local derby, while Atletico moved top of the table with a 1-0 win against Levante, putting them two points clear of Barca.

However, Rakitic dismissed his side's goalless draw as just one of those rare occasions where Barca could not find the net, with Lionel Messi and Luis Suarez both striking the frame of the goal in a frustrating encounter.

"Sometimes the ball just doesn't want to go in," he said.

"But we have to move forward because we’re playing well and we’re dominating. If we weren't generating chances, then that would be worrisome."

The Croatia international said with Arda Turan and Aleix Vidal set to join the playing squad once the club's FIFA transfer ban expires, the squad would be refreshed and even more dangerous than before.

"It’s always important for players to come, even more when they are this good. We're really excited for them to join us because, with them, we'll be even better."

Barcelona defender Gerard Pique expressed some discontent with the Espanyol pitch, but praised the opposition for their constant pressure.

"When we play in Cornella we expect them to be intense and that they'll pressure us and, today, that's what happened," Pique said.

"The pitch did not help on first touches, and that allowed them to pressure us sooner. It was an uncomfortable game.

"As far as intensity we were fine, but we lacked fluidity with the ball."