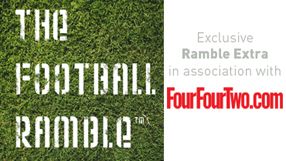 And they also scooped Best EPL Podcast and Funniest Website in the EPL Talk Awards.

Every week, they are lovely enough to produce a special, exclusive extra bit for FourFourTwo.com.

You'll have to listen to get it.

So why not start listening, open another window and carry on reading too?

If you like what you hear, you can get the main weekly Ramble podcast from TheFootballRamble.com or subscribe via iTunes here.