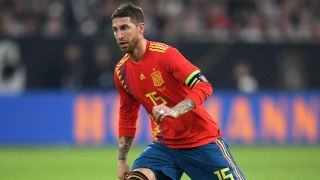 Spain defender Sergio Ramos believes the 1-1 friendly draw with Germany on Friday demonstrated the team's considerable potential ahead of the World Cup.

La Roja arrived at the previous edition of the tournament in Brazil four years ago as holders, but crashed out in the group stage after losing 5-1 to Netherlands.

Head coach Vicente del Bosque could only guide them to the round of 16 at Euro 2016 and stepped down after the tournament, making way for Julen Lopetegui.

A convincing qualifying campaign has Spain back among the favourites ahead of this year's finals.

And Real Madrid defender Ramos, who earned his 150th senior international cap in Dusseldorf, feels his side made something of a statement with their performance against Joachim Low's men.

"We've shown on the pitch today [Friday] that we can do things only a few teams are capable of," he said.

"Germany is the defending world champion. This is why we have such belief in this generation.

"We have always kept our feet on the ground. We treat every opponent with great respect."

To put on this shirt for the first time 13 years ago was incredible.To do it 150 times is a dream made possible thanks to all of you: coaches, colleagues, supporters...And two special people in particular. Thank you, Luis. With you always, Antonio. March 23, 2018

The introduction of Atletico Madrid striker Diego Costa in the second half saw Ramos playing in the same team as a fierce domestic rival during the final 25 minutes.

And the 31-year-old acknowledged that LaLiga hostilities are only put aside temporarily when the national team are in action.

"We're very friendly," he said of the combative centre-forward.

"We've had a great relationship in recent years. But if we have to face each other in the derby, then we'll fight."