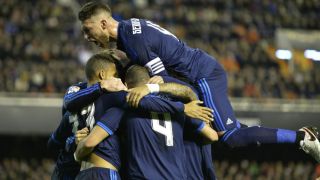 Captain Sergio Ramos believes Real Madrid showed the character expected of them after securing a 2-2 draw against Valencia on Sunday, despite being reduced to 10 men.

Karim Benzema gave Madrid the lead with 16 minutes gone before Dani Parejo levelled things up from the penalty spot on the stroke of half-time.

Things got harder for Madrid when Mateo Kovacic was shown a red card, but Gareth Bale managed to put the away side ahead late on, only for Paco Alcacer to cancel that out within a minute.

"It's clearly been a game with a lot of intensity. The team came out for the three points, but due to the circumstances of the game we didn't get them," Ramos told Movistar Plus.

"We went forward and they equalised at the end, with just a few minutes left. The loss of a player made us work much more, maybe because we knew we were close to victory.

"We came out with great intensity, but they were able to take advantage in the last minute. When you have one player fewer, the physical exertion doubles, there's more space and the team suffers more.

"The team has showed the character that people ask of us, that they demand from this crest."

Madrid coach Rafael Benitez has come under increasing pressure, with Madrid four points shy of the summit, but Ramos gave his backing to the 55-year-old former Valencia coach.

"Benitez deserved credit. He is the coach and he will always have the confidence of the players," he said.

However, Ramos was not as full of praise for the match officials.

"The referee? I don't think they want to make mistakes. There were controversial moments. We were told at half-time Bale should have had a penalty," he added.