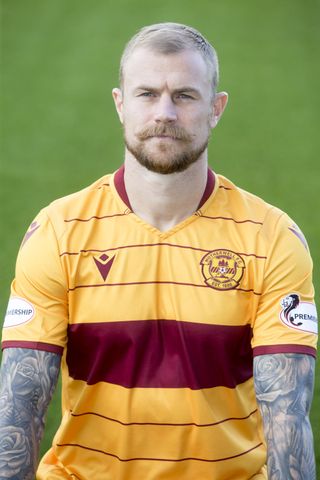 Richard Tait believes Motherwell grew stronger following last season’s humbling loss at Ibrox and he is hoping to show just how much they have improved when the Steelmen visit Rangers on Sunday.

Defender Tait was part of the Well team who suffered a 7-1 defeat to the Light Blues last November.

But rather than crumbling after that result, Motherwell went on to enjoy an upturn in form in the second half of last season, winning five games in a row across January and February.

And Tait thinks Motherwell are now in a better place as the team sitting third in the Ladbrokes Premiership travel to second-placed Rangers.

Tait said: “Massively improved. I think we improved after that. I think we showed at the back end of that season that result probably made us a little bit stronger as a unit, as a team.

“We went on to have a good season in the end. There are not many players left from that team that played, I don’t think.

“But it’d be nice to go and kind of put that right on Sunday.

“They’re one of the best teams in the league and everybody wants to beat the best.

“It’ll be a tough ask, going there is really tough – to go and put in a good performance – because the fans get on top of you.

“But it’s enjoyable. It’s what you play football for. So hopefully we can go there and put in a good performance and maybe get a win.

“It’s a great place to go and play football. If you don’t enjoy going there then you’re not really a big fan of football, I’d say.

“The lads are looking forward to it. We’ve had a good week’s training, the manager’s trying to get his game plan into us and if we can execute that on Sunday that’d be great.”

Motherwell saw their two-game winning streak come to an end last weekend as Aberdeen beat them 3-0 but Tait has been encouraged by his side’s start to the season.

“I think we can take confidence from the fact that we’re playing well.”