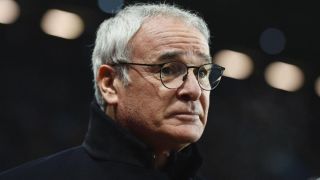 Leicester City manager Claudio Ranieri protested that Aston Villa's equaliser in the 1-1 Premier League draw at Villa Park should have been disallowed for handball.

Shinji Okazaki hit a 28th-minute opener for the Premier League leaders and Ranieri was left to rue a missed penalty from Riyad Mahrez five minutes later.

Bottom-of-the-table Villa were buoyed by that let-off and levelled 15 minutes from time through Rudy Gestede – the goal allowed to stand despite the ball striking the substitute striker's hand in the build-up.

Leicester sit a point ahead of Manchester City and Arsenal at the summit, although they will cede top spot if Arsene Wenger's team avoid defeat at Stoke City on Sunday.

"We lost two points," Ranieri told a post-match news conference. "We started very well, we scored a goal but after the missed penalty the Aston Villa players took a new energy

"In the second half we expected the long ball for [Libor] Kozak and, for the second ball, it was a battle.

"But we were very calm and very attentive, and they scored with a handball that the referee didn't see. It was unlucky, and that's it.

"One point in a derby is okay but we are disappointed."

Mahrez has scored four penalties so far during Leicester's remarkable campaign, although Mark Bunn's save from his tame effort marked a second miss from 12 yards since the turn of the year.

The winger was also off target in the goalless draw at home to AFC Bournemouth two weeks ago, but Ranieri refused to definitively remove him from penalty duties.

"Now it is not important if I change the penalty man," he said. "I will speak with him and then I will choose."

Despite the close-run nature of an intriguing title race, Ranieri insists he will not be pouring over events from the Britannia Stadium on Sunday.

"Maybe I go with my family to the restaurant," he added.

"It is not important now for us. It is not April, it is only January.

"In April, if we stay there at the top of the league I will also watch the other teams."