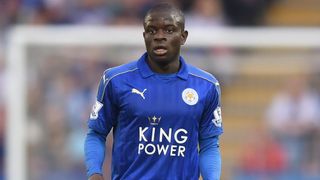 Kante's impressive season has led to him being linked with a switch, with Chelsea and Arsenal among those reportedly interested.

However, Leicester are keen to keep the France international and Ranieri said the 25-year-old had been offered a new deal despite being contracted until mid-2019.

While the Italian would prefer Kante stayed, he knows the midfielder may want a new opportunity.

"I know one thing, we have offered a new deal of a contract to him," Ranieri told the Leicester Mercury.

"He wanted to wait because he wanted to finish Euro 2016. Now I hear there is so much speculation behind him.

"At this point, I hope the team bring the maximum. I don't know about the money, I am not a manager, just a coach, so I don't speak about money.

Ranieri was unwilling to say whether Chelsea had put in a bid for Kante, but is aware of interest from numerous clubs.

He said: "I don't want to speak about this kind of speculation.

"I speak to him but I can't tell you. I speak often with him. I would like now to be sure who stays with me or not, because now we start the friendly games and I have to manage change and try to do something.