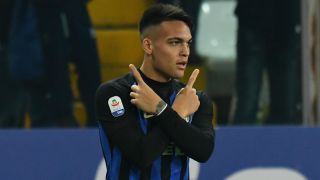 Inter are in control of their Europa League last-32 tie with Rapid Vienna thanks to Thursday's 1-0 victory in Austria.

A penalty from Argentine striker Lautaro Martinez six minutes before half-time was enough to give Luciano Spalletti's side the win, their second in a row in all competitions.

Much of the pre-match talk centred around Mauro Icardi, who was stripped of the club captaincy and then withdrew from the travelling squad, which he suggested was due to injury.

His compatriot made the most of a first start in Europe for the club, winning and converting the spot-kick to give his side the edge ahead of next week's return game at San Siro.

Inter's dominance of the ball yielded few early opportunities for Martinez, selected as the visitors' attacking spearhead in place of the missing Icardi.

There was a long delay when Mario Sonnleitner had to have a nasty cut to his head stapled after an accidental clash with Stefan de Vrij, and, three minutes after the restart, Manuel Thurnwald's clumsy challenge on Martinez allowed the forward to dispatch the ball calmly down the middle of the goal.

2 - Lautaro #Martínez has scored in two consecutive matches for Inter for the first time in all competitions. Toro.#RapidInter#UEL— OptaPaolo (@OptaPaolo) February 14, 2019

Rapid had a Dejan Ljubicic goal disallowed for offside shortly before the interval, before substitute Christoph Knasmullner forced Samir Handanovic into a one-handed stop from Veton Berisha's cut-back, but Inter repelled the home side's threat with relative ease to claim a valuable result.

What does it mean? Spalletti rides out Icardi storm

Inter ended a four-game winless run at Parma last Saturday, but this will feel equally sweet for Spalletti given the confusion around Icardi and his future.

Champions League qualification via Serie A is very much in Inter's hands, but the Europa League represents a valuable fall-back option and the chance of a trophy to boot. Winning it could well help Spalletti keep his job beyond the end of the season.

He did not have a huge amount of service, but Martinez was a menace to the Rapid defence and took his penalty with aplomb. Winning goals in back-to-back games will help both his confidence and the job security of his coach, while suggesting there is life after Icardi for Inter.

A loose touch and careless lunge from Thurnwald allowed Martinez to score the winner. Aside from that incident, he attempted just nine passes before being replaced 53 minutes in.

Inter resume Serie A duties at home to Sampdoria on Sunday, when Rapid have a cup meeting with Hartberg.