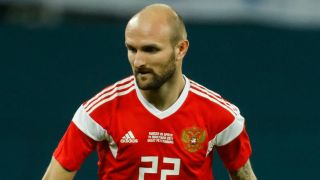 Konstantin Rausch and Roman Neustadter have been left out of Russia's final 23-man squad for the World Cup.

Soslan Dzhanaev, Fedor Chalov and Alexander Tashaev are the other names to be cut from the provisional squad by Stanislav Cherchesov.

The coach has largely selected domestic-based players, with all but two of the squad playing their club football in Russia. Villarreal's Denis Cheryshev and goalkeeper Vladimir Gabulov of Club Brugge are the exceptions.

After suffering a 1-0 defeat to Austria on Wednesday, they will hope to get their preparations back on track when Turkey visit Moscow on Tuesday.

The hosts play Saudi Arabia in the opening match of the tournament on 14 June, before facing Egypt and Uruguay in Group A.