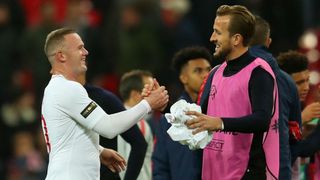 Harry Kane is convinced that surpassing Wayne Rooney's record haul of 53 England goals is "definitely possible" for him.

Rooney's international career came to a close on Thursday in a friendly against the United States, which was organised to honour the former Manchester United striker.

He was unable to add to his tally in the 3-0 win at Wembley, however, and tipped Kane to one day go past him.

Tottenham star Kane has netted 19 times in 34 outings for his country, and having been named captain, looks set to have the central striker's position nailed down for the foreseeable future.

Kane insists he is not looking too far into the future, though he is confident he can topple Rooney's record.

"It's definitely possible, but it's a fair bit away," Kane told reporters at England's pre-match news conference ahead of facing Croatia in the Nations League on Sunday.

"I don't like to set targets that far ahead because a lot can happen, we'll see over the next few years.

"Hopefully I'll still be fit and healthy and still getting picked by the manager. It's definitely achievable, but I'm not thinking too much about it."

Sunday's visit of Croatia is a crucial one for League A Group 4 in the Nations League, as both sides go into the game level on four points, two behind leaders Spain.

Whoever emerges victorious at Wembley will qualify for the Finals, while defeat for England would mean relegation to League B, as would a score draw.

With Ivan Rakitic out, Croatia will place even more responsibility on the shoulders of Luka Modric, and Kane – a former team-mate of the Real Madrid man – thinks he deserves all the plaudits that have come his way this year.

"I think he's definitely up there, for sure," Kane said when asked if Modric had been the best player in the world in 2018.

"I played a little bit with him when I was a younger kid at Spurs. Everyone knows now how good a player he is."