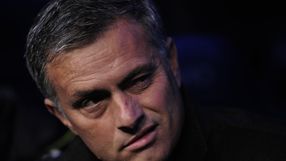 The nine-times European champions are already assured of a place in the last 16 and need only a point to secure first place in Group G while the buildup to next Monday's 'clasico' against second-placed Barca is already in full swing.

Jose Mourinho's unbeaten La Liga leaders will travel to the Nou Camp with their one-point advantage intact after a 5-1 battering of Athletic Bilbao at the Bernabeu on Saturday.

Mourinho watched his side win from the stands, as he completed a two-match touchline ban, and his number two Aitor Karanka said afterwards squad rotations were likely in Amsterdam.

"We are still top and we'll see what happens next Monday," Karanka told reporters.

"First we will think of our next game which is on Tuesday. There will be changes against Ajax. Things are going well and we have players in the squad who can come on at any moment."

Argentina striker Gonzalo Higuain and Germany midfielder Sami Khedira have already been ruled out of the trip with back and hamstring problems respectively, which could see Karim Benzema and Lassana Diarra step up from the bench.

Cristiano Ronaldo's rich vein of form continued with a hat-trick on Saturday, taking his tally in La Liga to 14 from 12 games. He is unlikely to be rested.

The game is far more important for Ajax who are third in the group, one point behind second-placed AC Milan with two matches left to play, and a win would help ease the pressure on coach Martin Jol.

They have taken only one point from their last three league matches and slipped to fourth, six points behind leaders PSV Eindhoven after being held to a 0-0 draw at home by PSV on Saturday.

Former Dutch great Johan Cruyff has been critical of Jol recently and after Saturday's game called for the coach and the board to step down.

"As long as Cruyff lives he will say things about Ajax. He is doing it now and has done it in the past, I understand from my predecessors," Jol told reporters. "I just have to live with it."

Jol faces serious problems on his left flank as Vurnon Anita pulled out injured on Saturday, while Urby Emanuelson has been suffering with an ankle injury.

Anita is expected to be fit but Emanuelson's absence might open the door for Miralem Sulejmani on the left.