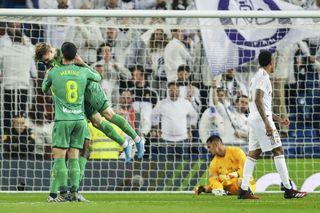 Real Sociedad produced a shock 4-3 win at LaLiga leaders Real Madrid to reach the semi-finals of the Copa del Rey.

Midfielder Martin Odegaard – who is on a two-year loan at Sociedad – broke the deadlock against his parent club after 22 minutes.

Alexander Isak then scored twice in the space of two minutes early in the second half to leave the Santiago Bernabeu faithful stunned.

Marcelo pulled a goal back before Mikel Merino restored the visitors’ advantage. Vinicius saw a header ruled out by VAR, but Marcelo did make it 4-2.

Nacho set up a dramatic final few minutes of added time, but although defender Ander Gorosabel was sent off for a second caution, Sociedad closed out a famous victory.

Los Blancos coach Zinedine Zidane had opted for some seven changes from the side which beat rivals Atletico Madrid, but there was still no place in the squad for Wales forward Gareth Bale.

Following a cagey start, Sociedad started to ask questions of the home defence as Adnan Januzaj’s angled shot was blocked.

The visitors took the lead in the 22nd minute. Following a break down the right, Isak’s low 20-yard drive was palmed out by Alphonse Areola. Odegaard was first to the rebound to drill his shot through the legs of Areola – and showed respect for his parent club by not celebrating along with his team-mates.

Real Madrid were on the back of a 21-game unbeaten run in all competitions and are three points ahead of Barcelona at the top of LaLiga.

The hosts upped the tempo as James Rodriguez tested Sociedad keeper Alex Remiro with a 20-yard effort before Vinicius’ cut-back was blocked and Federico Valverde’s rising drive was saved.

Captain Sergio Ramos then saw his header come back off the crossbar, but the offside flag was swiftly up anyway.

Sociedad threatened again just before half-time as Isak blasted his shot off target after being played through on goal.

Luka Modric replaced Rodriguez for the second half, but the hosts were almost further behind when a defence-splitting pass from Odegaard found Isak for the striker to slot home – only for the goal to be ruled out by VAR for a close offside call.

Sociedad did double their lead in the 54th minute when Isak crashed a volley past Areola from a floated cross by substitute Ander Barrenetxea.

Before the hosts could regroup, they fell further behind when Isak scored a third from a deflected ball into the penalty area.

Real Madrid responded just before the hour when Brahim Diaz picked out Marcelo, who crashed his shot in at the near post.

Vinicius curled an effort just wide before Sociedad added a fourth goal in the 69th minute when Mikel Merino swept in a cross from Isak.

Real Madrid – who had won the competition 19 times, but not since since 2014 – were again left chasing the game, as Karim Benzema headed over from Nacho’s cross.

Brazilian Vinicius thought he had pulled another goal back with 10 minutes left, but his header was ruled out for offside following a lengthy VAR review.

It was 4-2 when Rodrygo converted from close range – with VAR this time ruling in favour of the home side.

Benzema’s floated cross was put in by Nacho before Gorosabel was sent off for a second quick caution, but Ramos saw his flicked header saved as Sociedad held on.