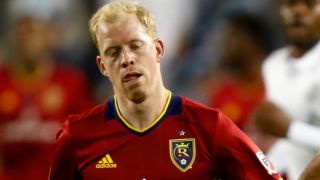 The Englishman struck midway through the second period after being set up by a delectable chip from Javier Morales.

Mulholland's effort cancelled out Chris Wondolowski's ninth-minute goal, with both side's forced to share the points at the Rio Tinto Stadium.

The draw means RSL remain winless in six MLS games, missing out on the chance to move above LA Galaxy in the Western Conference.

San Jose, meanwhile, stay in eighth place, three points out of the top six in the west.

It had all started so brightly for the visiting Earthquakes, taking the lead inside the first 10 minutes as Wondolowski ended an eight-game scoreless run - converting from close range after a corner kick.

But from that point on it was home side RSL who had the better of the chances, and would probably feel they should have walked away with a win.

The hosts had a penalty protest waved away in the 61st minute after Victor Bernardez brought down Juan Martinez in the box.

RSL did eventually find an equaliser, with Mulholland smashing home a strike three minutes later after being set up by a superb Morales dink pass inside the area.

San Jose could have retaken the lead after a blistering strike from distance, but Shea Salinas' shot came off the crossbar and all the way back to him.

RSL were denied another penalty late on, with the referee bizarrely awarding a free-kick in the other direction, while San Jose goalkeeper David Bingham got a crucial touch to keep out a fierce Demar Phillips strike in the closing stages, ensuring the game finished all square.