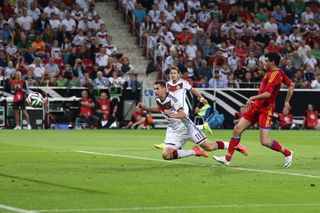 The Lazio man netted his 69th international goal on Friday as Germany thrashed Armenia 6-1 in a friendly at the Coface Arena in Mainz.

Klose came on in the 67th minute and scored soon after, making a clever run to get on the end of a Lukas Podolski cross to nod in from close range.

The goal took Klose one clear of Gerd Muller for most goals for Germany.

"This goal means something for me but it was important to play with the team again," he told reporters.

Injuries have ruined Klose's season and he missed Germany's 2-2 draw against Cameroon as he continues to regain fitness.

The 35-year-old said he wanted to have an impact at the FIFA World Cup as he looks to break Brazil great Ronaldo's record of 15 goals at the showpiece event.

Klose has netted 14 times at the World Cup.

"I did not have the legs to play in the last international but I feel a lot better every day," he said.

"I want to play at the World Cup and help my team."

Germany meet Portugal, the United States and Ghana in Group G at Brazil 2014.