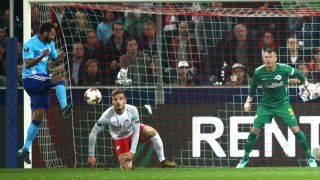 Marseille booked a place in the final of the Europa League after surviving a stirring Red Bull Salzburg comeback, Rolando's extra-time goal proving decisive in a 3-2 aggregate victory.

The French giants led 2-0 from the opening leg at home, but a flat performance from Rudi Garcia's men opened the door for Salzburg to battle their way back into the tie with a 2-0 victory over the 90 minutes at the Red Bull Arena on Thursday.

Throughout a low-quality first half a Salzburg comeback appeared improbable, but two goals in 12 minutes got the Austrian side level on aggregate and dreaming of a place in the final.

Amadou Haidara's brilliant solo goal sparked life into Marco Rose's side and when Bouna Sarr could only deflect a shot from Xaver Schlager into his own net, the tie was level.

But Marseille struck the winner with four minutes of extra-time to go, substitute Rolando finishing well from a Dimitri Payet corner to spark delirious celebrations.

Salzburg's players remonstrated furiously that the set-piece was incorrectly awarded and, left needing two goals to advance, lost their discipline in the closing stages as Marseille progressed to the final on home soil – they will play Atletico Madrid in Lyon on May 16.

Haidara was dismissed for a second yellow card after lashing out at Payet, with Rose storming onto the field at full-time to confront referee Sergei Karasev and his officiating team.

Salzburg needed a bright start and they got one, with Andreas Ulmer and Munas Dabbur both having early efforts saved by Marseille goalkeeper Yohann Pele.

Morgan Sanson should have done better with a 17th-minute chance, the midfielder dragging a first-time shot wide when found by Sarr, who signed a new Marseille deal on Wednesday.

Lucas Ocampos rifled into the side netting in the first minute after the interval and Valere Germain slotted a volley wide after Payet picked him out with a typically pinpoint pass.

But Salzburg took the lead in the 53rd minute with a sensational solo effort from Haidara.

The midfielder picked up the ball on the right and powered through a series of weak Marseille challenges before poking a low finish out of Pele's reach.

Salzburg's confidence levels were raised by Haidara's brilliant skill and he was central again as the hosts drew level in the 65th minute.

Haidara's cross was half-cleared by Adil Rami and, when Schlager fired at goal, Sarr stuck out a foot and diverted the ball in, even though the strike seemed to be heading wide.

Salzburg suddenly scented blood and Pele had to make a good save low to his left to deny substitute Hwang Hee-chan.

Florian Thauvin's cross was blocked by the arm of defender Duje Caleta-Car with four minutes to go, but Karasev rejected Marseille's passionate appeals.

Salzburg had the best chances of extra-time, Caleta-Car seeing a powerful header beaten away by Pele, then Dabbur drilled a decent opportunity wide.

But Marseille struck deep into the added period from a corner Salzburg felt was incorrectly awarded, Andre-Frank Zambo Anguissa's shot appearing to deflect wide off a Marseille team-mate.

Payet's right-wing centre found Rolando in space towards the back post and his cushioned finish had just enough on it to sneak past Salzburg keeper Alexander Walke.

The Austrians' misery was completed when Haidara was dismissed for losing his temper and thrusting a hand into Payet's face, with Marseille progressing to their first European final since 2003-04, leaving Salzburg to protest furiously.