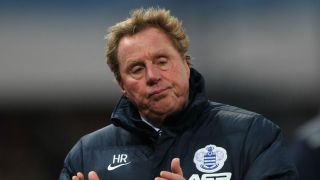 The 67-year-old stepped down from his post as QPR boss earlier this month, citing ongoing problems with his knees.

After a long career which has previously seen him enjoy spells at Bournemouth, West Ham, Portsmouth, Southampton and Tottenham, Redknapp is eyeing a return in 2015-16.

"I'll be looking to get back in next season," he told Sky Sports News.

"The off-season comes and then I'll be looking to work somewhere because I love it.

"I've got nothing else in my life really. I'm useless around the house and football is what I love. I still feel as good as I've ever felt.

"My knee will be sorted out in a week or two so I'll be ready to go again and I'm looking forward to that."

Chris Ramsey was appointed as Redknapp's successor until the end of the season - a decision which raised the eyebrows of the former boss.

"Well it was a surprise, I have got to be honest," Redknapp said. "It would have probably been a surprise to people outside of football.

"For me, being on the inside, I had a feeling they might go that way and what an opportunity for him to walk straight into a Premier League club."