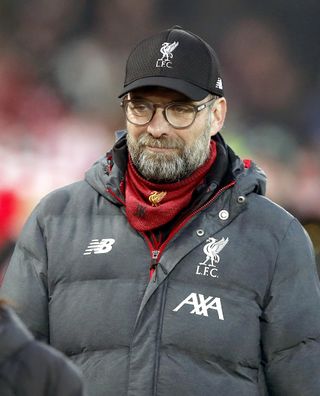 Liverpool manager Jurgen Klopp is adamant he has to take a stand over the mid-season break or nothing will ever change in the future.

The Reds boss has attracted criticism for announcing neither his first-team players nor he will be present for the FA Cup fourth-round replay at home to Shrewsbury next week as it falls within their scheduled Premier League hiatus.

Instead the club will send out a youth team led by under-23 coach Neil Critchley.

His decision has been supported by a number of fellow managers and, while there has been wider opprobrium about the situation, Klopp is unrepentant, insisting a line in the sand has to be drawn.

“I have to make decisions that aren’t popular, based on the situation we are in,” said the German, whose pre-match West Ham press conference was dominated by the issue, with six out of the 10 questions he fielded being on the subject.

“I don’t want to be in the middle of all these discussions, I’m not a revolutionary guy and want to show the whole world how strong I can be. That is absolutely not the reason.

“If we always react in the same way we always react – ‘We have to sort it somehow and find a way to do it’ – then nothing will change, and I think all people in football agree things have to change.

“The discussion now is good. I got a lot of support message-wise.”

Klopp has faced scrutiny for opting to miss the match and putting Critchley in charge, which is what happened last month when a clash of schedules meant the first team were in Qatar winning the Club World Cup at the same time as a Carabao Cup quarter-final at Aston Villa.

But he hit back at those critics who are “misunderstanding” the situation.

“If people call me lazy, disrespectful to cup competitions, it is just all not true but that is not important because everyone has a right to an opinon,” he added.

“Could I be here for the game? Of course I could but that would be a complete misunderstanding of management and coaching.

“I don’t come here for showing up for the team for two days’ or one day’s training and now I tell the boys (what to do).

“That would be like all the good coaches from the past could still come in, like Fabio Capello could just go to the Italian national team and tell them two days before what to do and everything would be fine.

“It is not like this. They need their coach – and they get their coach, Critch. They get all our support and we try everything as a club to win that game and it is possible. That’s the only thing which is important.

“I am responsible for my players and I decided with the group, with the coaches, this is the mid-season break.”

Klopp also hit out at the organisation of a mid-season break which afforded time off from Premier League matches only for FA Cup replays to be thrown into the mix after the event.

The winner of our fourth round replay will face @ChelseaFC.#EmiratesFACuppic.twitter.com/G2lD8M4wLP— Liverpool FC (@LFC) January 27, 2020

“The Football Association tried to do something with moving (fifth-round) games to midweek to decrease the intensity of the period a little bit,” the Reds boss said.

“But in the end whoever was involved – and if someone from our club was involved and forgot to say ‘no’ or whatever – the situation ended up with them giving us two weeks but it was not clear which week you would get.

“I don’t know who was there from which club, but I know the FA said all the clubs agreed.

“No sports-responsible people were there. Not a manager, not a sporting director and that’s what we need, that’s what has to change otherwise next season we have exactly the same situation.”

On the pitch, forward Sadio Mane is likely to return from a muscle tear after the break in time for the trip to Norwich, meaning he will have missed only three matches – one of which was the cup tie at Shrewsbury he was never likely to play in anyway.