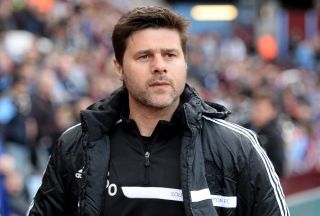 Speculation has been rife that the likes of captain Adam Lallana and left-back Luke Shaw will depart St Mary's at the end of the season, while manager Pochettino has been touted as a potential candidate to take over as Tottenham head coach if Tim Sherwood is relieved of his duties.

However, executive director Reed has appeased supporters fearing that several of the south-coast club's sought-after players are set to depart and is confident Pochettino will remain in his role.

"I work very closely with Mauricio," Reed said. "We speak every day and sometimes for several hours in a day. I think there's a lot of misinformation out there that needs clearing up.

"The first point I'd like to make is that, with regards to Mauricio Pochettino's contract negotiations, both Mauricio and myself - that (dealing with negotiations) is my role - are very happy with the way we are approaching it at the moment.

"We would like to focus on the remaining games of this season and Mauricio has repeatedly said that and therefore we will pick up the details of any contract talks in the summer when the season is over.

"That is accurate; that is the truth. That is exactly where we are. Reports that we are about to close deals on certain players and so on are totally misinformed, misleading, and are not true.

Interest in Pochettino and members of his playing squad is borne from an impressive Premier League this season.

The next visitors to St Mary's are Roberto Martinez's Everton, a team Southampton have been likened to, a comparison Pochettino welcomes ahead of Saturday's clash.

"It flatters me that Southampton Football Club is actually compared to Everton because Everton for the last 10, 11, 12 years has always been in the top six or top eight," the Argentinian said. "Southampton has been barely two seasons in the Premier League.

"Everton have a massive squad and that's not the case with Southampton but the comparison I do like, I do relish it, because it means that we are doing things right."