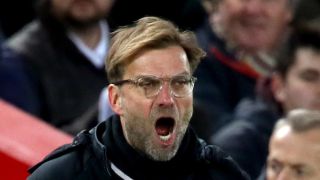 Jurgen Klopp says referee Jon Moss told him he made a mistake as two controversial penalties helped Tottenham to snatch a 2-2 draw at Liverpool in a thrilling Premier League encounter on Sunday.

Mohamed Salah's third-minute opener put Liverpool on track before Victor Wanyama came off the bench to thrash in a long-range leveller and spark a hugely dramatic last 10 minutes at Anfield.

Harry Kane went down under a Loris Karius challenge, but Liverpool felt there was an offside in the build-up to the incident, Moss pointing to the spot after lengthy discussions with his assistant.

Karius denied Kane and Liverpool edged back in front in the first minute of stoppage time thanks to Salah's superb solo strike, only for another arguable spot-kick to give Spurs the chance to steal a point.

Virgil van Dijk's challenge on Erik Lamela was adjudged to be a foul and this time Kane stepped up to send Karius the wrong way and score his 100th goal in the Premier League.

Klopp, however, was left baffled by two debatable decisions that went against his side, although Dele Alli had been booked for simulation earlier in the second half.

"It was clear, two sides with high quality who were desperate to win and we've made the game," Klopp told Sky Sports.

"The result is massively influenced by decisions, always we have to take it. Did you ever hear [referees explain themselves]?

"I'm not allowed to go in the [referees'] room for half an hour after the game. The first thing after the whistle he [the referee] comes to me and says he made a mistake, clear offside, unbelievable. I don't know what they [the officials] were discussing.

"Second one, Van Dijk touches him but Lamela wants the touch and jumps 100 per cent, he feels the touch and it's [given as] a penalty. In the first half we got no free-kicks in this situation, go and play, that's the level for the game.

"A situation like that in the last minute you have to be sure, but he [Moss] wanted to be in the middle of interest and here he is."

We didn't deserve that! Great effort from the boys they deserved all three points! February 4, 2018

Salah's double appeared to have given Liverpool a crucial three points in the race for Champions League qualification, with Klopp pleased with Liverpool's performance despite Spurs earning a draw.

"How can you be completely in control against Tottenham?" Klopp said.

"We had fantastic moments and they had to chase the game with spaces in midfield but we created a lot of chances, lots of good crosses from both wings and big chances to be honest, fantastic moments, but you cannot control the game against them for 90 minutes. It's just hard to accept decisions.

"Physically it was difficult and then at the end we went to the three at the back and they had Lamela with two strikers and two 10s in the middle of the park, we did well. We have to defend with big passion and we did, but obviously we didn't get the benefit of it, but what can I say."