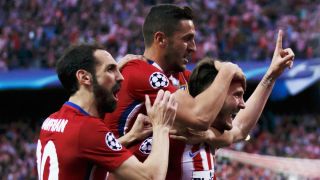 Miguel Reina says Atletico Madrid proved they are now "a super-team" by beating Bayern Munich 1-0 in the first leg of their Champions League semi-final on Wednesday.

A superb individual goal from Saul Niguez secured a narrow aggregate advantage for Diego Simeone's men going into the return fixture at Allianz Arena next week.

And Reina, who lost the 1974 European Cup final to Bayern as an Atletico player, is proud of the extraordinary progress made by his old team in recent years.

"Atletico Madrid showed yesterday that they are a team," he said.

"Atletico is now a super-team, no doubt.

"We had [expected] the last few days that it could be one of those games which creates football fans, and we were lucky because it was. We saw a great Atletico and a great Bayern as well."

Reina, the father of Napoli and Spain goalkeeper Pepe Reina, believes the match at Vicente Calderon showcased the two best coaches in the world.

"The two greatest [current] coaches faced each other yesterday. One is [Pep] Guardiola and the other one is Simeone," the 70-year-old said.

He added, referring to Barcelona's Dutch-influenced tradition of possession-based football: "They are the best for me … The main difference between Guardiola and Simeone is that Guardiola has done it already. And he has done it in a team which had [Johan] Cruyff [as coach] and continued that.

"But Simeone has built a team from the ground zero. In Barcelona, the youngsters have been playing like this [a] long time ago.

"Simeone has given Atletico lots of character, the players go onto the pitch smelling blood. What they are doing is memorable, and the fans are doing their part too, they are unique."