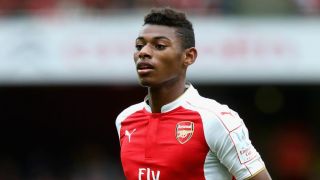 Mikel Arteta is confident Arsenal youngster Jeff Reine-Adelaide has a bright future ahead of him.

The 17-year-old, who joined Arsenal from Lens ahead of the 2015-16 campaign and is waiting for his first-team debut, is regarded as an exciting talent and club captain Arteta expects big things from the French winger.

"His change of direction is crucial because he can eliminate people from getting close to him so quickly. In addition to that, he understands the game. I believe he has all the attributes to become a really good player.

"He's still at a young age but he is learning a lot and he really listens to people.

"He's doing really well and when he trains with us, you can tell that he's quite comfortable. Jeff seems to handle situations well too.

"He played in the Emirates Cup where he was brave and took people on. I think he really wants it. He is hungry and if you give him time, he could have a really positive career as he has something about him."