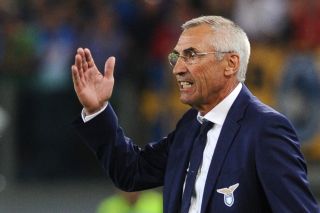 Reja, who was confirmed as Vladimir Petkovic's replacement on Saturday, marked the start of his second stint at the Stadio Olimpico with a victory thanks to Miroslav Klose's 81st-minute winner.

Despite securing three points, Reja claimed his side can improve much more under him.

"We haven't played very well today. We can do much, much more," he told Sky Sport Italia.

"These three points give us some serenity, but we know we are not in the best condition."

The victory keeps Lazio in the top half of the table while Inter slip to sixth after Verona's win over Udinese earlier in the day.

Despite his reservations over Lazio's showing, Reja was pleased to secure the win against one of the league's better sides.

"Inter are a very good team and can take advantage of any errors you make, especially if you give them space out wide and in midfield," he added.

"I thought we played a smart game today though."