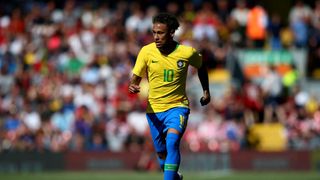 Neymar's return to action was everything Brazil needed it to be on Sunday.

The Selecao star came on as a second-half substitute and scored a glorious goal in a 2-0 win over Croatia to emphatically answer any doubts about his physical condition ahead of the World Cup.

Brazil's talisman and leader suffered a fractured foot in action for Paris Saint-Germain in February, raising concerns over his participation in Russia.

He was unable to play again for PSG before the end of the season, leaving doubts about just how much of the real Neymar we would see at the World Cup and whether or not it would be too late for him to hit top gear.

Any such fears should now be a thing of the past and that will be a relief for all fans of Brazil and football.

Neymar was only ever expected to feature from the bench, meaning head coach Tite deployed Philippe Coutinho – who was subjected to a few jeers from the Anfield crowd – on the left flank.

Gabriel Jesus, wearing the captain's armband for the first time, led through the middle and Willian occupied the right wing, though all three struggled to make a consistent impact in the first half.

Coutinho cannot be accused of not trying. On the contrary, he saw the ball a fair amount compared to some of his attacking colleagues.

But he looked a little lost at times on the left, regularly caught out by the aggressive pressing of right-back Sime Vrsaljko.

The Barca attacking midfielder drew a huge roar from the crowd just after the 20-minute mark when nutmegging the Atletico Madrid man, though that was a rare flash of brilliance in a first-half performance that lacked substance.

His other two more notable involvements saw him cut in from the left and blast efforts high into the stands as if he was trying to hit those responsible for the early boos.

Although Croatia's willingness to channel some dark arts with respect to tackling will have given Tite and Neymar cause for concern, the PSG man was – as expected – introduced at half-time for Fernandinho.

The switch saw Coutinho drop back into a midfield role and instantly Brazil's shape looked far more natural, giving them a genuine creative influence in the centre – something that was lacking in the first half – while retaining a threat and presence out wide.

Ultimately, Neymar's performance was hardly important. Rather, it was crucial for Brazil's fans to see him fully on the road to recovery before the World Cup and not still suffering from the effects of that innocuous collision against Marseille on February 25.

He looked determined to not let the fear of another injury upset his flow – a brilliant first touch to escape Vrsaljko and lure his opponent into giving away a foul just after the hour evidence of that mindset.

Another such incident five minutes later brought a similar outcome, as he spun away from former team-mate Ivan Rakitic, leaving him helpless and forced to commit a foul.

And soon after that he truly exploded, latching on to Coutinho's pass into the left side of the box, before brilliantly jinking past a couple of defenders, cutting back on to his right foot and blasting his effort in off the crossbar.

The celebrations had an elation rarely associated with friendly matches, as Brazil swarmed their star man.

Roberto Firmino went on to wrap things up with a brilliant goal of his own late on, but there was no doubt what the story here was.

Neymar is back, and just in time.