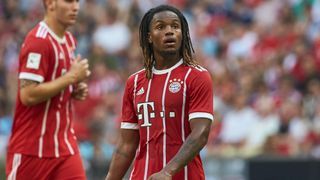 Renato Sanches will get the chance to kickstart his career with Bayern Munich, new head coach Niko Kovac has revealed.

The midfielder has struggled to make an impact since joining Bayern in a deal worth an initial €35milllion shortly before shining at Euro 2016, where he was named Young Player of the Tournament as Portugal triumphed.

Swansea City were then seen to have pulled off an impressive coup in landing Sanches on loan last season, but he failed to impress in 12 Premier League appearances as the Welsh club ultimately suffered relegation with him on the sidelines through injury.

But Kovac is not giving up on the 20-year-old and hopes he will fight for his future at Bayern.

"He is a young player and young players fluctuate now and again, that is completely normal," Kovac said at his first news conference since leaving Eintracht Frankfurt to take charge.

"On the other hand he is from another country, so you have to understand if he doesn't integrate in no time at all.

"I will try to integrate him, so that he will be comfortable around here, because when someone feels comfortable, it is much easier to make a good performance."

Kovac added: "There is no question that he has qualities, he showed that before and that's why Bayern signed him.

"I am excited to work with him, because he has qualities you don't see very often in the Bundesliga.

"I hope that he will accept the fight and he will be motivated to give it all from the first moment on. And then I am convinced that he will shows us the performances that we expect from him and the ones that he expects from himself."