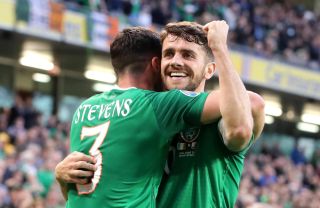 Joseph Chipolina’s own goal and a late effort from substitute Robbie Brady handed the Republic of Ireland a Euro 2020 qualifying victory over Gibraltar.

On a night when 36,281 turned up at the Aviva Stadium hoping for a goal-fest, Mick McCarthy’s men needed a stroke of good fortune to set them on their way to three points courtesy of a 2-0 win which keeps them at the top of Group D with 10 from their opening four games.

The Republic, whose arrival at Lansdowne Road was delayed when they had to change buses after a mechanical failure, misfired despite dominating possession against stubborn opposition and took the lead when David McGoldrick’s 29th-minute shot hit the unfortunate Chipolina and ended up in the net.

McGoldrick later struck an upright before Brady came off the bench to score in added-time but the game ended with he and fellow frontmen Callum Robinson, Scott Hogan and Sean Maguire still awaiting a first goal for their country and having seen a golden opportunity pass them by.

McCarthy had insisted in the run-up to the game that the style in which his side won did not concern him as long as they won, and admitted he would take a goal going in off somebody’s backside if it secured three points.

His comments proved somewhat prophetic and while he may be satisfied with the result and elements of the performance, the cutting edge his team will need to convert a decent start into qualification with far more testing fixtures to come during the second half of the campaign was sadly lacking.