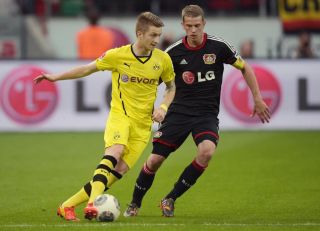 The result ensured Dortmund stayed seven points clear in second spot, though Schalke have one game in hand, while Leverkusen remain fourth in the race for UEFA Champions League football.

Dortmund were far from their best against Leverkusen, falling behind twice in the opening half and Reus is aware his team must lift if they are to dethrone defending champions Bayern in Berlin on May 17.

"It wasn't a great performance from us today," the Germany international said.

"It was a very intensive game, especially in the first half, but I think we were at fault for both goals, we left ourselves over-exposed and didn't get back quickly enough.

"But we hauled ourselves back into it... when we play our own game, press high up the pitch and win the ball, we do well.

"When we play like we did in the second half, it gets difficult. We're well aware of that and we know we'll need to take it up another level for the cup final."

Dortmund, winners of the DFB Pokal in 2012 after upstaging Bayern, have Bundesliga fixtures against Hoffenheim and Hertha Berlin to contend with before the cup decider.