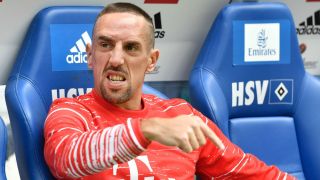 Bayern Munich winger Franck Ribery has stepped up his comeback from a thigh injury as his first-team return moves closer.

Ribery has missed Bayern's last five matches across all competitions, but the club are hoping he will be fit to return in time for Saturday's Bundesliga clash with Hamburg at the Allianz Arena.

Failing that, head coach Carlo Ancelotti revealed last week that the latest he expected the 33-year-old to return in the DFB-Pokal tie at home to Schalke on March 1.

But the Hamburg encounter looks like a realistic option after Ribery took a step forward by training on what was a day off for his team-mates on Monday, with the club describing his activities in great detail.

"Ribery dribbled his way through slalom poles, jumped over hurdles and sprinted until his heart was content," read Bayern's statement.

"His efforts mean a return to full team training are edging ever closer."