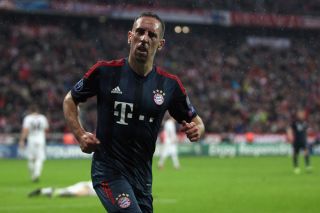 The France winger missed the Bundesliga victory over Mainz on Saturday due to an ankle injury, but he marked his return with a double as the Czech champions were taught a harsh lesson at the Allianz Arena.

David Alaba, Bastian Schweinsteiger and Mario Gotze were also on target for the ruthless Bavarian giants, who mesmerised Plzen with some slick passing and movement and should have won by an even more emphatic margin.

UEFA Champions League holders Bayern have a 100 per cent record in Group D, scoring 11 goals and conceding just one in their first three games.

Coach Pep Guardiola appears to have taken Bayern to another level and the performance on Wednesday sent another statement of intent, although Ribery insisted that they will not rest of their laurels.

"We played a good game and it felt good coming back," Ribery said.

"We enjoyed ourselves out there but there are tough games ahead so we need to win at Plzen in our next match."

Guardiola was naturally delighted with such an emphatic win, but the former Barcelona coach still sees room for improvement.

"I'm happy with the performance of my players. I said I wanted a better first period from Saturday (against Mainz)," he said.

"I believe that in the (UEFA) Supercup final against Chelsea and our three European matches (in the UEFA Champions League), we played well. We still have to improve a little in the Bundesliga. This may be normal. We may need some time."

Defeat for Plzen leaves them bottom of the group and yet to pick up a point ahead of the return clash in a fortnight.