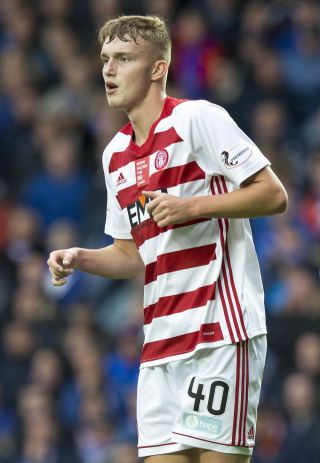 Hamilton head coach Brian Rice has backed his young players to find the energy and enthusiasm to handle a second game in four days.

Accies only had two players aged over 23 in their starting line-up as they went down to a 1-0 defeat by Aberdeen on Wednesday.

And Rice will have to ask some of his young players to go again when Ross County visit Lanarkshire on Saturday.

Rice said: “We don’t make excuses, every team has injuries, but I’ve got six players who normally start who were missing. Experienced players like Brian Easton, Blair Alston, Marios (Ogkmpoe), Aaron McGowan. These lads are invaluable for me to help with the younger lads.

“But the young lads coped fantastically well against a strong Aberdeen team.

“Young Jamie Hamilton came in alongside Sam Stubbs, they are playing in the Premiership at 17 and 20 years old as a partnership.

“Yes, we were under the cosh at times but they kept trying to keep themselves in the game and have a go.

“With their energy, enthusiasm, and they have had a wee taste of it, I think and hope they will be bursting to get back out on the pitch.”

“At this moment in time it’s doubtful but maybe another 24 hours I might get one or two back,” he said. “There’s two or three who definitely won’t be back but I won’t name them.”