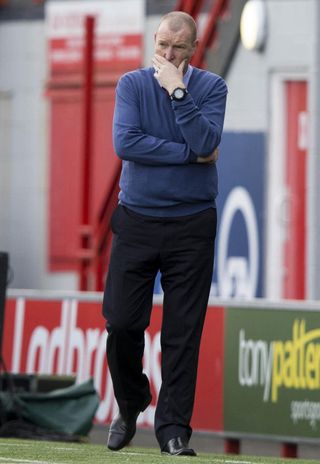 There were worrying scenes both on the pitch and in the Foys Stadium stands as his side took on Partick Thistle in the Betfred Cup.

Referee John Beaton was forced to halt the first-half action for 10 minutes as Accies midfielder Ronan Hughes was carried off wearing a neck brace following a nasty fall.

And medics were then seen racing into the away section to tend to a Jags supporter who had become unwell.

That came after the father of Thistle midfielder Jamie Mansell had rushed to the aid of the fan, performing CPR until emergency services arrived.

Now Rice has paid tribute to the way all involved handled the testing circumstances.

He said: “Saturday was a tough day with what happened to Ronan and then obviously the incident with the Partick Thistle supporter.

“We hope everything is well there and we wish him a speedy recovery.

“I think everybody responded well to that medics and doctors-wise in that case but also with the game being stopped for 10 minutes with Ronan.

“It was a serious situation on Saturday. You never wish to be put under those circumstances and that pressure.

“But I must congratulate everybody for the way they reacted so promptly in looking after the Thistle fan and Ronan.”

Hughes was taken to hospital for checks but thankfully for Rice, the damage was not as bad as first feared.

The 20-year-old will sit out Saturday’s final Group F clash against Airdrie but Rice is confident he will be back in action soon.

“It was very, very worrying for everybody and especially Ronan and his family,” said the Accies boss. “Ronan is still recovering. He came back in on Monday but still wasn’t really himself.

“He got the all-clear on Saturday night after the x-rays but he’s still a bit sore and there’s a bit of concussion there too.

“He had a few days off but is back in this morning so we’ll just monitor him.”