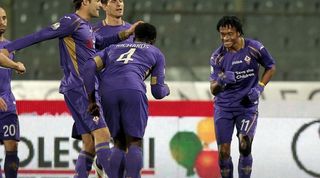 Chelsea are reportedly eager to sign the Colombia winger Cuadrado before the transfer window closes on Monday.

Manchester United are among the other clubs to have been linked with the 26-year-old and defender Richards is not surprised to hear that Cuadrado is in demand.

He told Sky Sports News HQ: "After the World Cup he had lot of teams looking at his situation and I have heard all the top teams in England are looking at him and so they should be.

"I have been training with him every day and he's got everything; technique, speed, power, pace. All his attributes would be suited to the Premier League so I can see exactly why he is being linked with a move there

"He's loved here at Fiorentina and if he was to leave the fans would be gutted but I suppose as a player he's got to decide what’s best for him.

"He's been here for five or six years so if he feels like he needs to make that step then I would be happy to give him advice."

Richards also revealed that he does not see his future at parent club Manchester City when his season-long loan at Fiorentina ends.

He said: "I'd love to play for Manchester City again one day, it's a club close to my heart,

"I have been there since I was 14 but to go back there now I would see as a step back. I won Premier League medals, an FA Cup and League Cup in my time there but I am better than just sitting on the bench somewhere."