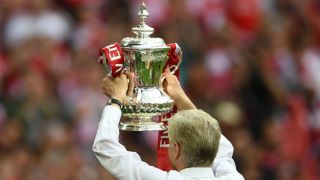 Arsene Wenger said it would be "ridiculous" to make a decision over his future based on the outcome of one match following Saturday's FA Cup final victory against Chelsea.

Speculation has been rife for much of the season over whether Wenger will continue at Arsenal, with his current contract due to expire at the end of June.

The Frenchman has been the subject of criticism from sections of the Arsenal support but he guided the club to a seventh cup crown of his 21-year tenure at Wembley.

His future is set to be resolved at a board meeting next week.

"It's not about popularity, it's a bout competence. You cannot make 35 years at the top level if you believe you are not the right man to do the job."

An announcement regarding Wenger's future is expected on Wednesday, though he was unable to provide much insight as to what the meeting will involve.

But he did reveal that he will keep a winner's medal for the first time in his managerial career, breaking the tradition of giving them to members of his backroom staff.

He said: "I don't think I can answer that question at the moment. For once I have kept my medal, so it is a special night for me. We will see what happens in the future.

"We are adults here. If I’m still here next season, I’ll still be like this in the press conferences."

However, Wenger did accept that the uncertainty surrounding his future has not helped Arsenal this term.

He continued: "In recent performances we won seven games out of eight and if you look that until December we were 20 games unbeaten - more than ever.

"This season has been hurt by a blip in March and I am convinced now, looking back at this season, by the uncertainty about my future with the players."

The FA Cup triumph made Wenger the competition's most successful manager, bringing the season to a joyous close for the 67-year-old.

But the vitriol he has had to put up with from some supporters is something he "cannot accept" and has definitely left a sour taste.

"I feel I am in a public job, I accept to be criticised and I accept that people don’t agree with me," he added.

"But, once the game starts, as a fan you stand behind the team. That is what I did not accept this season and I will never accept it.

"Outside the game, I accept. I never had any word with any journalist in 20 years when they criticise my opinions and it is the same with the fans. I understand that.

"But when the game starts you support your team. We played some games in a hostile environment and I cannot accept that."