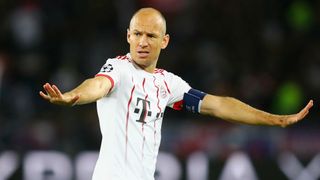 The former AC Milan boss was dismissed last week after Bayern were thrashed at Paris Saint-Germain in the Champions League.

Robben had refused to defend Ancelotti after that game, but he insists further quotes attributed to him in recent days - hitting out at training sessions with the Italian - are fabricated.

"All of a sudden there are things appearing in the media that I would like to distance myself from - these so-called quotes are nonsense," the Netherlands international told NUsport.

"I hate it when things like this happen. I am the last person out there who would have a go at a coach, a fellow player or anyone else.

"You have to be a man when someone leaves and don't hit out at anyone."

Bayern threw away a two-goal lead to draw with Hertha Berlin under interim coach Willy Sagnol in a match that saw Robben substituted just before the hour, but the 33-year-old took no issue with the decision.

"I was disappointed because we threw away a two-goal lead," he added. "But it is the coach's decision to substitute me and I accept that. It does not mean I cannot be disappointed though."