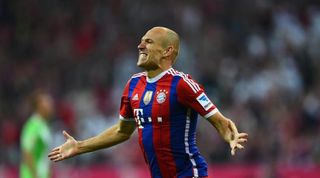 Rudi Garcia's side sit second in Serie A with just one defeat in seven games, having suffered a controversial 3-2 reverse to champions and current leaders Juventus earlier this month.

Roma started their Group E campaign with an impressive 5-1 win over CSKA Moscow before claiming a deserved 1-1 draw at Manchester City.

That leaves them two points behind Bayern and Robben is anticipating a tough test at the Stadio Olimpico on Tuesday.

"Roma are our toughest rivals at the moment," he said. "They're playing the best football in Italy at the present time."

Team-mate Thomas Muller scored the winner in Bayern's 1-0 triumph in Moscow last time out, with the hosts having put a heavy emphasis on frustrating the Bundesliga champions in that game.

The Germany striker is expecting a different type of match against Roma.

"Especially as a forward, you relish playing a team who are unlikely to pull all 11 men back to their own penalty area," said Muller.

Bayern were beaten on their last trip to Roma in 2010, when the hosts recovered from two goals down to win 3-2 in a group-stage clash.