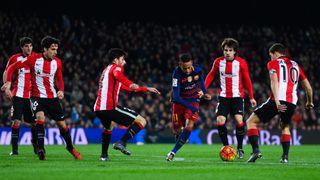 The former Madrid full-back and Brazil international was quoted as saying he would bring Neymar from Barcelona to Madrid if he gets a coaching role with the club.

Neymar was on form again for Barcelona on Sunday, as he scored one of Barcelona's six goals in a crushing win against Athletic Bilbao in La Liga.

But Carlos ruled out any potential swoop for the Barcelona star.

"It is impossible, I said that in jest and someone has taken it seriously because Madrid will always bring the best in the world," he said.

Carlos has been back in the Spanish capital with his former club as he prepares to further his coaching career.

The World Cup winner said he could potentially work for Madrid under new coach Zinedine Zidane, but said his focus was on continuing his coaching education.

"I'm happy for the possible interest in my, but I'm here for training and learning," Carlos said.

"Now, I start my course at the highest level. I took five years of training in Turkey, Russia and India.

"But I still have a lot to learn, so give it time."