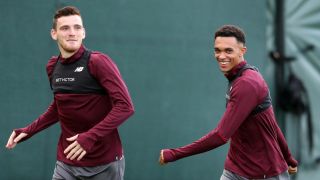 Liverpool's full-backs are thriving due to a healthy rivalry and a contest over which of them can contribute the most assists this season, Andy Robertson has revealed.

Left-back Robertson and right-back Trent Alexander-Arnold have been ever-present in Liverpool's six successive Premier League victories so far this season and the pair have made four assists between them.

Three of those came from Robertson, while Alexander-Arnold's corner led to Joel Matip scoring Liverpool's second goal in a 3-0 win over Southampton.

Robertson jokingly contested his team-mate's first assist of the season, telling the club's official website: "That should be half!

"It's from a dead ball, a corner-kick.

"We've had that argument but I think I'll give him his point. I'm 3-1 ahead, which is always nice.

"We're both just hungry to contribute, defensively first and foremost – we want to keep clean sheets.

"But, going forward, we want to chip in with goals and assists."

Both players have contributed goals, Robertson netting his first and only Liverpool goal in a 4-0 victory over Brighton and Hove Albion in May, while Alexander-Arnold scored once in the Premier League and twice in the Champions League last season.

Scotland international Robertson said the friendly competition between the defenders was helping both players.

"Last season, we had a small competition," said Robertson. "It started a bit later in the season.

"This season, we decided to have a competition and see who comes out on top at the end.

"He's a fantastic player so I'm sure it'll be tight; if I keep up with him, with his assists, then I'm sure we'll both have a good season."