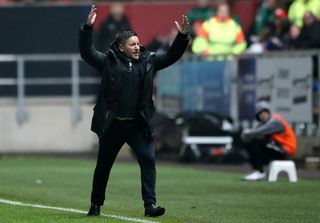 Bristol City manager Lee Johnson has been handed a misconduct charge from the Football Association for comments towards a match official following the Sky Bet Championship defeat at Luton.

The Robins slumped to a 3-0 loss at Kenilworth Road on October 19, after which Johnson had criticised his team’s “lackadaisical” attitude.

A statement from the FA confirmed Johnson’s post-match comments to a match official had left him facing disciplinary action.

“Bristol City manager Lee Johnson has been charged with being in breach of FA Rule E3 following the EFL Championship fixture between Luton Town and Bristol City on Saturday October 19 2019,” a FA spokesperson said.

“It is alleged that, following the conclusion of the fixture, his language towards a match official was abusive and/or insulting and/or improper. He has until 1800 on Monday October 28 2019 to respond.”

On Wednesday night, Johnson’s men recovered form to record a 2-1 win over Charlton – with a goal from Josh Brownhill deep into stoppage time after forward Famara Diedhiou had been sent off.

Bristol City are currently fourth in the Sky Bet Championship table, and next host Wigan on Sunday.