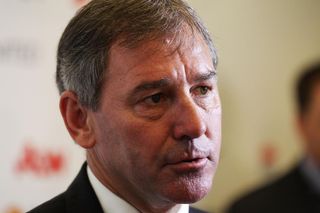 It has been a tough season and a bit for United as they struggled last term with David Moyes at the helm, while simultaneously watching Manchester City replace them as Premier League champions.

The 2014-15 season has not seen as much as improvement as the Old Trafford faithful would have hoped for either, although new manager Louis van Gaal has inspired United to their current four-game unbeaten run, which sees them sit eighth in the standings.

"I think the only reason why United haven't got a few more points in the bag at this moment is because of all the injuries to the midfield players and defenders.

"So hopefully when we get that back we'll get a little bit more consistency into the game and win a lot more games."

While United remain a work in progress for Van Gaal, Robson claimed he saw enough in their 1-1 draw with leaders Chelsea last week to indicate they can take the game to City at Etihad Stadium.

"It's one where as United you've got to be really strong and play with a bit of pace and if the lads can do that they proved against Chelsea they can get a result against the best teams," the former midfielder said.

Robson still considers City favourites for the derby, however, although the 57-year-old is pleased with the stubbornness United have displayed over the past fortnight, scoring late equalisers against Chelsea and West Brom.