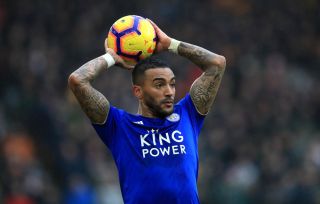 Simpson, a regular in the Leicester team that won the title in the 2015-16 season, will leave when his contract expires this summer.

The 32-year-old right-back has found opportunities limited this campaign due to the form of Ricardo Pereira, who won the club’s player of the year award this week.

Simpson has not made an appearance since Rodgers was appointed manager in February but the Foxes boss has spoken of his respect for the player and praised his effort and commitment in training.

“Danny is an interesting one because there’s a perception about Danny, maybe from the outside in terms of how he works, but I have to say, he is absolutely first-class,” said Rodgers.

“He just wants to play now. He’s a good player, a good guy, and I have enjoyed working with him.

“He has trained very hard, he trains like a demon every day, and he’s at the age where he is still fit, still feels young and not ready to be a cover player.

“He has ambition to play and he still has, certainly another a few years at this level to go and play – to be a starter somewhere and that’s the reason why he is going to move on.

“Ricardo has obviously been amazing since he has come in, and Danny has shown in his time here that he is a very good player. Unfortunately, he hasn’t been able to play because of the form of Ricardo but I’m sure he will go on and get a really good club and go on to show his talent.”

It remains to be seen whether Simpson will play against Chelsea on Sunday at King Power Stadium in Leicester’s final game of the season.

The Foxes are unable to finish seventh, which could mean Europa League football next season, but Rodgers insists that does not mean they have nothing left to play for.

“It’s our last game here of what’s been a very difficult season for the supporters as well as ourselves. We will look to get a result, hopefully sign off with a big game and then look to the summer and get excited for a new season.”