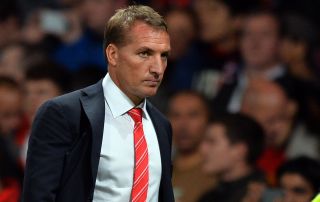 Suarez was handed his first Premier League start since the completion of his 10-match ban on Sunday, and grabbed two goals courtesy of assists from his fellow forward at the Stadium of Light.

Sturridge had earlier opened the scoring for the Merseyside club, and Rodgers believes the pair's performance proves they are among the best in the English top flight.

"I'm not sure there are two better (strikers) in the league," he said.

"There are some wonderful partnerships around, you've got (Robin) Van Persie and (Wayne) Rooney up there who've been outstanding.

"We've changed the structure of our team a bit to allow us to pass it better and we've still got an awful lot of work to do - but also to fit in with the types of players we have.

"And those two are right up there with the best in the country and you saw that today.

"For the goal, Steven Gerrard makes an absolutely breathtaking pass out of pressure and Daniel's touch, pace, power takes him in and he's shown that quality to roll the ball in for Luis to get his finish.

"I think those two will only get better, you see the understanding, we've done a lot of work with them together in training and they looked very bright today."

Liverpool came into Sunday's game having suffered a league defeat to Southampton and a League Cup exit at the hands of Manchester United over the past week.

And Rodgers was pleased with the way his team bounced back against a team out to impress following the sacking of manager Paolo Di Canio.

"I was delighted with the result. We had a really good performance but didn't get anything in the week at Old Trafford so to come away and get the result and perform in parts of the game as we did today was very pleasing," he added.

"Kevin (Ball, caretaker manager) had a reaction from his team, he's only been in charge of them for a short period of time but you could see the intensity and the focus they had in the game.

"So we always had to be alert and I thought we defended very well and on the counter-attack we looked very, very threatening so (it is) a great victory for us."